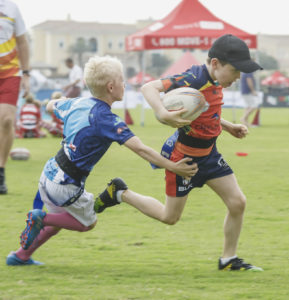 With 29 teams participating it was a fabulous competition. Core Savills took part in grueling six matches on Friday, before beating Alec in the men’s final 6-3 to become the first team in the history of the Zurich Corporate Touch 6s to successfully defend their title. In the mixed teams’ category, the Saudi Scorpions fought their way to a tense 3-1 victory over tournament newcomers Emirates in their final game, which saw them lift the Mixed Team Winners’ Cup for the first time. The Female Player of the Tournament accolade was awarded to Hattie Witty, who played for Zurich, while the Male Player award went to Robin Stewart of last year’s mixed team champions Atkins. Both showed great determination, skill and enthusiasm throughout the tournament on behalf of their respective teams. Returning to the tournament for the first time in six years was ex-England rugby union player, Steve Thompson. Thompson, who took part in the Transguard Living Team, was full of praise for the tournament: “I took part in the very first Zurich Touch tournament in Jebel Ali six years ago. Coming back today as part of the Tranguard Living team really highlighted just how much the tournament has grown. It has been a great carnival atmosphere and it’s great to see so many families down here making a real day of it.”

The tournament organizers, Corporate Affair Event Management ensured it was a fantastic event and Home Matters will be looking to support the event next year.